Let’s face it.  When you set out to make a change in your life, I’ll bet you aim for a higher success rate than ten percent.

That’s the thing, though.  Lots of times we set ourselves up for failure by trying to make wholesale changes.

“If you’re always striving, you’re never arriving,” was a favorite quote of one of my mentors, cable television pioneer Bill Turner.  And, since behavioral change is best achieved with reinforcement, it occurs to me that smaller steps may be the key to compliance. 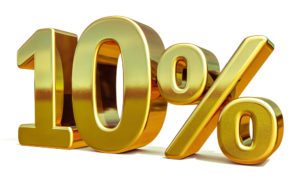 A Little Bit About Electricity

Besides, you may just need a little tweaking.  Which reminds me of a favorite quote, relayed by my friend, Pam.

Several years ago her father – in his seventies — was talking with one of his buddies.  Reflecting back over his life the friend said, “I know just about everything now – except a little bit about electricity.”

Talk about confidence!  We’ve gotten a lot of mileage out of that quote.

I’m thinking there are some playful ways you could “up your game” by ten percent this week:

Feel free to make your own list.  Just be sure to keep it minimal.  And only tackle one thing.

It may seem like a no-brainer, although this is what will keep it achievable – and fun. Be sure to guard against biting off too much.  There’s always next week — and next month — if you decide to go further.

The idea, though, is to just keep this simple.  Remember – we’re only looking for ten percent!

What you’ll be doing is wiring yourself for success.  Every time you meet your goal, you’ll be creating neural pathways in your brain that register this success.  It doesn’t matter that it’s a modest goal – it still scores big.

And the cool thing is you’re not in competition with anyone, other than yourself.  Just being a little bit better than you were before.

Talk about creating a habit!  In the early 1900s most Americans did not brush their teeth.  It was only after a successful advertising campaign for Pepsodent toothpaste that a new national habit was created.

As the brainchild of Claude C. Hopkins, a prominent American businessman, Pepsodent joined Hopkins’ other successful campaigns for Schlitz beer and Palmolive soap.

A decade after his advertising campaign for Pepsodent – featuring Clark Gable and Shirley Temple – tooth brushing became a daily ritual for more than half the population.  Who knew?

The Power of Habit

All habits have three components:

The Pepsodent success is outlined in the book, The Power of Habit, by Charles Duhigg.   When adman Claude Hopkins signed on to promote the toothpaste, he knew he needed to find a hook, a trigger for its daily use.

Hopkins sat down with a pile of dental textbooks.  “It was dry reading,” he later wrote in his autobiography, as recounted by the website, Slate (www.slate.com).

“But in the middle of one book I found a reference to the mucin placques on teeth, which I afterward called ‘the film.’  That gave me the idea to promote the toothpaste as a creator of beauty.

Soon, cities were plastered with Pepsodent ads.  “Just run your tongue across your teeth.  You’ll feel a film – that’s what makes your teeth look ‘off color’ and invites decay.” Another ad exclaimed, “Millions are using a new method of teeth cleaning.  Pepsodent removes the film!”

And there you have it – the trigger for a new behavior, the behavior itself and the reward.  Another important distinction as to why certain habits have such staying power lies in the concept of neurological cravings.

The familiar doughnut box in the office break room is an example cited by Slate to illustrate the craving concept. Insert yourself in this scenario. Maybe you’re not even hungry.  Your brain, however, associates a certain cue (doughnut box) with certain rewards (creamy filling).   And a subconscious craving emerges.

It All Adds Up

Just think about it.  If you show up ten percent better this week, you could chip away a little more next week.  Or next month.  Or next quarter.

The key is that your brain registers all these successes.  And they build on each other.  Small, consistent changes have a better rate of success than sweeping wholesale changes. The more confidence you generate, the easier it is to take additional steps.  It’s A-OK, though, to just stick with the ten percent.

Have some fun with this, and see how you feel.  You may be surprised by how these little successes register with your system. 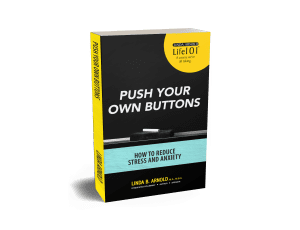